If you notice there’s a light on in the costume shop, stop in for a moment. You might just catch our newest staff member, full-time costume designer Janae Lafleur.
We did. And when we found her, we took the opportunity to learn a little more about her, how she started her story as a costume designer, and how her QCT story began.

Q: How did you get involved with theatre?

A: I have always done performance in some way or another since I was a kid. I used to be heavily into dance and gymnastics. I was also in a lot of commercials and did some modeling as a child. My love for theatre really started in Middle School, but it seemed like a natural leap.

Q: How did that love for theatre turn into a love of costume design?

A: I was actually pushed into costume design. I acted all throughout high school, but when it was time to go to college I was put in a position to choose between theatre and anything else. I chose English.

Meanwhile, I had my senior year of high school to finish. During my senior year in high school they opened a new category for thespians which involved designing and building a costume.  I had little experience sewing, but what I did know I picked up really quickly. I entered and won at the district level and was sent to the state competition for the first real dress I had ever sewn.

While at the state competition, my high school drama teacher, who was very disappointed in my decision to go to college for English, started talking to colleges on my behalf for costume design programs. She set me up with college interviews, all of which offered hefty scholarships. I ended up at Jacksonville University with a full ride scholarship because of the first dress I ever made. While in college I acted as well as worked in the costume shop, and when I graduated I was faced with another big decision: to pursue acting or costumes. I made the decision to go into costume design and attended the University of Florida for graduate school.

Q: What is your favorite part about being a costume designer?

A: My favorite part of designing is seeing a concept become a reality.  I really enjoy designing shows that are set in non-realistic/imaginary places, in strange cross over time periods, with inhuman characters.  I get a thrill out of being able to create an entirely new world and bring it to life on stage in a way that the audience will still believe it is real.

Q: What brought you to Quincy?

A: After I graduated from grad school, I worked as a shop manager for a year at the University of Florida. I just knew I would not be creatively satisfied working as a shop manager.  So, I began looking for designing jobs that would let me continue to grow creatively. I applied for QCT’s open position and eventually chose to work here because of the highly supportive, almost family-like atmosphere of the theatre. I really like the small town feel of Quincy and I am excited to explore more of the local places as times goes on. I am still very impressed and happy with the QCT family which has made me feel very welcome in the short time I have been here. 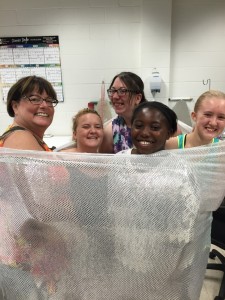 Q: Your first show here was HUGE! What was it like starting your new job with SISTER ACT?

A: SISTER ACT came with a unique set of challenges for me. The first was the fact that I was trying to design the show remotely while in Utah. Another challenge was trying to design with an unknown stock. It is very difficult to determine what needs to be built and bought for a show without knowing what can be pulled first. A final challenge was the time frame of my arrival to Quincy. I was extremely appreciative of the help I received on this show from the volunteers and Bonnie Furniss, who was running the shop in my absence. However, I was not able to be in Quincy until about a week and a half before the opening of SISTER ACT. Although the volunteers were able to get a lot done, there were decisions that could not be made until I was here. That created a very short time frame to get the show finished. Even with its challenges, SISTER ACT was a great show.

Q: What do you hope to accomplish in your time at QCT?

A: I hope that while I am here I will have the opportunity to stimulate an interest in costume construction or costume design within the younger members of the community. I look forward to being able to mentor students, and I hope to possibly utilize students in the designing of shows.

Q: What would you say to someone considering costume work?

A: If you have any interest at all, even if you feel apprehensive, just come in and give it a try. You never know, this could be your calling.