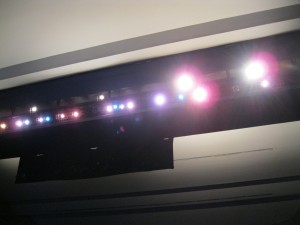 “Sit back and relax” is such a popular expression with watching entertainment, and yet it seems all wrong for live theatre.

When I was teaching, I would tell students to be active audience members. After watching a movie, a play, or a singer, ask questions: why did I like or not like that; what worked, what didn’t; what would I have done differently. There is something to be said for learning through observation (although the literal definition of acting is doing), and one of my favorite expressions is “amateurs copy; professionals steal.”

Most people attending theatre would say that they don’t go to learn something. They go to be “entertained.” I put that word in quotation marks because of the different views of entertainment. For some, entertainment is laughter, for others it can be being moved by a story – comedy or drama.

Why do people go to a stadium to see a game that they could see much better on television? Why do they spend most of the game on their feet? To quote a very popular musical, we want to be “in the room where it happens.” There’s such a different energy that occurs when sitting in a theatre watching a live performance than sitting on a couch looking at a screen.  Audiences are breathing the same air as the actors onstage, and they are experiencing the story at the same time as the actors are experiencing it. Every performance is different. At a sporting event, you believe that the energy you put out affects the players and the outcome of the game. The same happens with live theatre. The energy you send up to the stage affects the actors. That evening’s performance is being performed for that audience only, never to be repeated. The next performance will be different and will be only for that audience.

Instead of “sit back and relax,” when attending live theatre, lean forward (figuratively) and connect. Tonight is just for you.