The New Faces of SISTER ACT

One of the amazing things about Quincy Community Theatre is the opportunities it brings to actors young and old, those who have spent a lot of time on the stage and those who have newly realized their passion for the bright lights. While you’ll recognize some familiar faces taking advantage of these opportunities, Sister Act has also sparked interest in a lot of people who you might not regularly see at QCT – some who may never have passed through the theatre doors.

Disco nuns are certainly something that will catch your eye, and they certainly have brought some new faces to the stage. The familiarity in the story brought people reminiscing about the movie, just like Jessi Sparks, to the audition room. Or there’s Deb Druffel who auditioned on a dare and with a sinus infection, or Gretchen Dudley who has brought herself out of theatre retirement specifically for this production. And of course, there’s Nina Waters who has dreamed of playing Deloris for some time. These performers, and many others, can attest that the theatre has brought them joy and a new family. Deb has even decided to add auditioning to her bucket list just so she can now cross it off! Seeing them perform with the rest of the cast is like watching long lost siblings meet – there’s an instant connection. 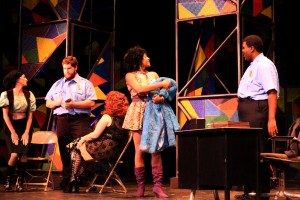 Sister Act has also brought some fantastic new talent to QCT offstage. The gorgeous costumes glittering onstage are the handiwork of the newest member of the QCT family, Janae Lafleur, and her marvelous costume crew. Sister Act is Janae’s first task as our new costume designer after her recent work for the Utah Shakespeare festival and the University of Florida. Although you won’t be able to see her, you will see the amazing work she does with a needle—something we can’t wait to see in future shows!

The new faces aren’t limited to the cast and crew. We’ve loved seeing so many new faces making reservations for a story that is loved by pretty much everyone who knows it. So when you come to the show, introduce yourself to the person next to you. Chances are you’ll be spreading a smile to someone brand new to the theatre.

We always love to see new people at the theatre, whether that be on the stage, in the background, or in the audience. Joyfully welcoming our new performers, volunteers, and audience members is something for which QCT prides itself. Those who come to the theatre become part of something bigger. However you choose to be involved, we’re honored that you have chosen to be a part of our family.

Getting Into the SISTER ACT Habits>>

SISTER ACT from Screen to Stage>>