SISTER ACT from Screen to Stage 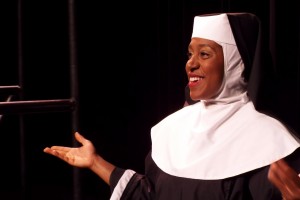 SISTER ACT is one of those movies that catch you as you’re flipping through channels. The moment you see Whoopi Goldberg, Maggie Smith, Kathy Najimy, and Wendy Makkena in their habits it’s game over. You’re in for the rest of the movie.

Now, nothing new can happen when you watch the same movie 50 times. No judgement if you have. I’ve spent many hours on the couch in my pajamas, hair askew, watching movies like SISTER ACT on TV. If you’re like me, you probably know what Whoopi is going to say and how she’s going to say it before she even opens her mouth. It’s a good performance, it makes you laugh every time, but it’s the same performance over and over and over again.

You won’t find the adventure of something new sitting on your couch.

You know where you will find it? Onstage. If you think about it, SISTER ACT always felt like it should be a Broadway musical. The movie is overflowing with humor and song—so much so that it’s shocking it took almost 20 years to hit Broadway. When it did, a shockwave of joy rippled throughout the theatre world.

The movie Sister Act actually isn’t a musical. Yes, there are songs in it, but in order to be a musical, the songs have to advance the plot and/or reveal insight into the characters. Plus, in a musical, the characters don’t acknowledge that they are singing. It’s a natural way of communicating for them. That means that all of the songs you’ll hear in the theatre will be bold, bright, and brand new tunes you may have never heard before.

It also has a retro flare. When composer Alan Menken was approached to turn the movie into a stage musical, he wanted the time period changed from the setting of the movie, the 1990s, to the 1970s. Why? Because he always wanted to write a disco score! Audiences will now hear an entirely original score, infused with the sounds of the 70s…. Think Saturday Night Fever. In fact, the song that opens Act 2 is called “Sunday Morning Fever.”

And it isn’t quite in the same place. To further complement the disco feel of the show, the writers changed the location from Reno and Los Angeles to the south side of Philadelphia. Instead of all the nuns piling into a helicopter and running through a casino, the climactic chase is staged (hilariously, if I may say so) within the walls of the convent.

A touch of romance was also added. The stage writers have also added a romantic subplot: The police officer in charge of protecting murder-witnessing Deloris Van Cartier actually went to high school with her and always had a crush on her. It adds to the theme that love can be found when and where you least expect it.

There may be many detail differences between the stage version and the movie version, but the plot remains mostly the same. And the experience? Pshaw! What you’ll experience in the theatre will be way better than your last living room movie binge. The lights, the flashy costumes, the big dance numbers, the joyful script, brand new music, the urge to dance in the aisles—even with its differences SISTER ACT will leave audiences on their feet, eager to, as the last musical number in the show says, “spread the love all around.”