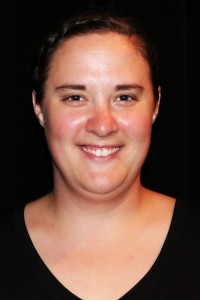 When she’s not onstage as Sister Mary Patrick, Mallory is the Sustainable Local Food Coordinator at JWCC and enjoys quilting, but onstage she is our Sister Mary Patrick – a delightful, loud, and accepting nun. Although Mallory is no stranger to the stage, this will be her first production at QCT. Prior to her performance in Sister Act, Mallory was in a nun in Muddy River Opera’s production of Suor Angelica and was in a production of The Music Man in Breckenridge, CO.

Auditioning for Sister Act was an easy decision for Mallory as she’s wanted to get back into musical theatre for years. The “right mix of classic and contemporary” music was enough to convince Mallory to dive back into the theatre world and audition for Sister Act.

“I play Sister Mary Patrick, the enthusiastic and loveable nun. I admire her gusto and willingness to wholeheartedly dive into music and good works in the community.”

Mallory says that one of her favorite elements of the show is its humor, and, of course, she has her favorite lines. 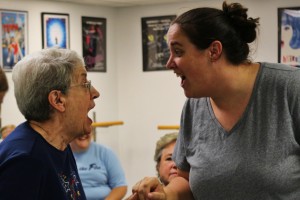 “[I love] when the nun choir debuts its new singing talent, the Monsignor delivers a sermon to ‘the last remaining Christians in the tristate area’ and he also says ‘and that is why we say Job got off easy.’ Hilarious!”

The role of Sister Mary Patrick can be very challenging at times, as well, with a large amount of energy used for dancing and peppy energy, so Mallory plans on “toning up her smile muscles”

The great thing about community theatre is that it’s always there to come back to, and the challenges of playing Sister Mary Patrick won’t be keeping Mallory away from the stage. She plans on returning to the stage after a short break, but for those who will be auditioning soon, Mallory agrees with Artistic Director Brandon Thomsen.

“As Brandon says, make strong choices! Have an idea and commit to it with confidence. Embarrassment doesn’t exist in musical theater!”