Skip to content
Home » Blog » Getting Into the SISTER ACT Habits!

Getting Into the SISTER ACT Habits!

When someone says Sister Act, the immediate picture that comes to mind is… 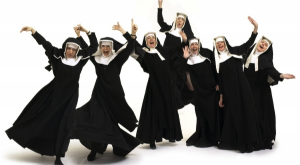 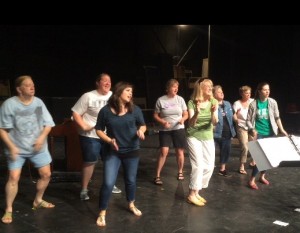 Hopefully you’ve noticed a glaring similarity within that list: every one of our twelve nuns is known as Sister Mary ____! This has created quite the challenge for this ensemble. They each have had to create a character which is completely distinguishable from the other nuns despite the fact that they have the same name and are wearing the exact same outfit.

Thankfully for us, our ensemble has been doing an amazing job of creating 12 completely different characters and making each of them believable. From the oldest and crabbiest nun, Sister Mary Theresa (Patricia McMillen), to the youngest and most naïve, Sister Mary Robert (Emily Dozier), our production has a vast array of exciting characters.

There are a few techniques that these women have implemented to accomplish this task. Part of the fun of being a member of an ensemble in the theatre is that the script gives almost no description of these characters. It is the job of the actor to decide their character’s family, friends, age, likes, dislikes, and the reason they are even in the play at all. Each nun has had to figure out why their character chose to live in the convent, whether or not they are happy there, and why they allow themselves to be changed by Deloris over the course of the show.

A few actors have used their imaginations alone to create this character; however, almost all of them have also used the script to their advantage. While there aren’t any explicit descriptions of these nuns, each character does have a few lines that reveal bits of information about their characters. This is particularly true in the song “It’s Good To Be A Nun” where the audience is introduced to the nuns as they explain what their “favorite part of being a nun” is!

When each woman is wearing the exact outfit and it happens to be a “long, black dress” (cue the music!), physicality is also a major tool that the nuns have utilized. An audience will be able to see the personalities of these nuns through simple physical choices such as how an actress holds herself and how quickly she move. Many actresses have used this technique to display their age and attention spans. Sister Mary Martin-of-Tours (Barb Fry) is “in her own little world,” so she holds herself in a much more relaxed position than the Sister Mary portrayed by Susan Job who has created an extremely obedient and cheerful character. One of my favorite examples of a distinguishing physicality and inflection in this production is our own Sue Osier. Her character is extremely deadpan and her physicality has her leading her entire body with the top of her head and moving very slowly. Meanwhile, her character creates hysterical moments by saying things such as “there’s nothing like the rush of doing chores for Christ our Lord.” She has managed to bring entertainment and life to Sister Mary Irene, and each of our nuns are matching that with their own energies and personalities.

One of the most beautiful things about live theatre is that it is never the same and I can promise you, there has never been a production of Sister Act with these particular nuns. It has been a joy in the rehearsal process to watch our ensemble imagine and make choices to become these unique characters, and I am sure the audience is going to love them too!!

SISTER ACT from Screen to Stage>>