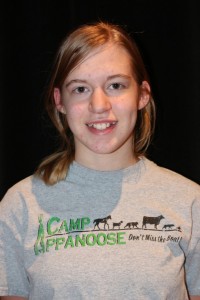 If you scream during THE HALLOWEEN TRILOGY, it’s probably because of Katie Hogge.

Katie, a student entering her freshman year at Quincy Notre Dame, has the scariest role in the entire show—or so she’s been told—and it’s only her first time onstage. Her QCT story began in April when she was cast in THE HALLOWEEN TRILOGY.  To Katie, this was the perfect introduction to the theatre world.

“I decided to audition for THE HALLOWEEN TRILOGY because I thought it would be a good beginner play for someone who has never been in one before, like myself,” said Katie. “Plus, it just seemed super fun to be in something like Christmas in July except, in this case, Halloween in June.”

As far as first plays go, this has been quite the experience. Katie plays three different characters: Fleete, an officer in her Majesty’s regiment travelling in India in “The Mark of the Beast;” Virginia, a teenage girl who has travelled with her family from New York City to a castle just outside of London in “The Canterville Ghost;” and the best friend of one of the main characters in “The Cask of Amontillado.” Her first role is, how should we say, physically demanding. 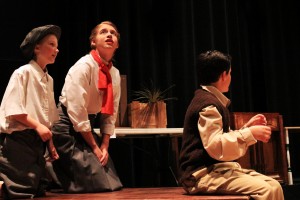 “My favorite moments in the show would be when I am either jumping on or off of a table or running around like a crazy person which, in the first play, I am,” said Katie.

Always careful to not ruin the surprises in store, Katie does admit that she has some pretty thrilling scenes. Yet, it isn’t what she’s doing physically that makes them so terrifying. According to Katie, the real scare factor comes from the audience.

“I’m excited about THE HALLOWEEN TRILOGY because it makes people think about what things look like instead of the actors and actresses having to lay it all out for them,” said Katie. “They are able to use their imaginations to think and they use their ears to really make the story how they want it. It’s up to them to see how the story will actually look and how scary it will actually be.”

We’re only a few days away from opening night and Katie is already thinking ahead. She plans to audition for anything that piques her interest, and is already hoping to audition for A WRINKLE IN TIME. For anyone thinking of joining her in those auditions, Katie has a word of advice:

“Just go for it. Be the person you are, don’t be afraid of what you can do, shine as bright as you can, and just knock ‘em dead.”