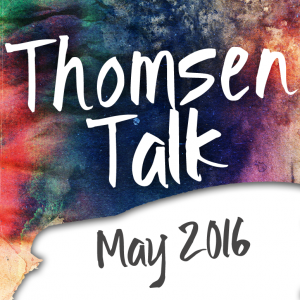 Grandma and Grandpa Thomsen were huge supporters of mine. They would travel around the country to see a play I was acting in or that I had directed. After I moved to Quincy, they saw my production of A Year with Frog and Toad. During intermission, Grandpa Thomsen walked out into the lobby and came over to me, holding out his program, and said, “Someday you have to tell me what it is you actually do.” I said, “Grandpa, what are you talking about? You’ve seen lots of my shows. I was the director.” “Yes,” he said, “but what does that MEAN? I thought maybe you did the costumes, but it says here that so and so did the costumes, or maybe you did the set, but I see that so and so did the set. What did YOU do?” I said, “I got all those people to do those things!”

Here is some insight into what I do as a production’s director:

The production team – including set and costume designers and music directors and choreographer – gather in a room and discuss the story of the play. What do we like about it, dislike about it; what do we think it’s about it; and what do we want to say about it. The director has to make certain that each department is telling the same story. The lights have to tell the same story the costumes are telling, and the costumes have to tell the same story the set is telling, and so on. From all the ideas that are discussed in meetings, the director creates the unified vision for the production. When working with actors, the director serves as a kind of editor, saying “keep this, take out that, what if we did it this way or that way….” The director is not a puppet master, dictating every little move an actor makes. Rather the director casts the play with people who are creative and can do the homework it requires to make intelligent choices during rehearsals. Rehearsals are meant as a play time where the actors discover the characters and the strongest, most interesting way of telling the story. The director has to, once again, make certain that the actors are all telling the same story and that the storytelling is clear for the audience.

We have a mantra in our rehearsals at QCT that says, “In this room it is impossible to fail; Go ahead, try it.” This is the invitation to all those involved with a production to put themselves out there and explore any idea in an effort to further the storytelling. My job as a director is to create an environment that is supportive, where everyone feels comfortable sharing ideas and putting their creativity into action.