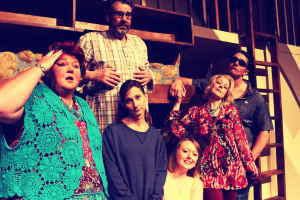 QCT’s hilarious production VANYA AND SONIA AND MASHA AND SPIKE is coming up pretty soon and what better way is there to get the word out than by having the intern blab about it!

For those that don’t personally know me (so, basically almost everyone reading this), I’m Cameron, the intern here at QCT. A quick disclaimer before I get started, you should probably know that I’m a total sucker for shameless, dysfunctional, comedy; and mentally, Vanya and Sonia resonate with me on near spiritual levels (never before would I have thought to call myself a wild turkey and be so proud of it).

VANYA is the story of two siblings, Vanya and Sonia, in their 50s living in their childhood home when their actress sister, Masha, and her hot, young boy toy, Spike, come to town and throw everything on its head. Things get even crazier when the fortunetelling maid, Cassandra, and the cute, peppy neighbor, Nina, are added into the mix. When you put so many big, out-of-this-world personalities together, you get, in my opinion, one of the biggest hot messes ever seen. Trust me when I say that these people will make your family look the definition of normal.

What I personally love about this show is the unashamed, sassy, and borderline psychotic behavior/comments that come from these characters. One moment Cassandra is warning us about a mysterious entity known as Hootie Pie and in the next, Sonia is throwing coffee cups into walls. With this group of characters, anything goes, from angry screaming matches in Snow White costumes (a movie that Nina has somehow never seen!!) to Spike running around the stage in just his underwear.

Another aspect of the show I find hilarious is the constant sibling conflicts that occur and drive the plot. The personalities of the shy, adopted sister Sonia and the larger-than-life actress (in her head, at least) Masha are extreme polar opposites; the chaos that erupts from them both is nearly impossible to describe. The closest thing I can think of is if you tossed a hardcore introvert and extrovert into an arena, gave them each some sort of weapon (maybe a coffee cup in Sonia’s case), and just let them go at each other.  Yeah, things get THAT crazy in this show.

One other hilarious point of the show is the highly satirical portrayal of the younger generation (as in, people my age) through Nina and Spike…but mostly Spike. Nina is a pretty normal person, aside from her slight obsession with Masha, her idol. Spike, on the other hand, is the living embodiment of everything that the older generation believes my generation is like; though it’s not too far off. Spike is Masha’s new vain, shameless, less than bright, wannabe actor who almost got cast in the sequel to Entourage. Despite his personality, he is a very friendly person; and let’s face it, Spike is just nice to look at (Have you ever seen a reverse striptease before? If not, come see it for yourself; you’ll thank me later). However, he is the catalyst for what is by far my favorite part of the entire show: when Vanya goes on what has to be a 15-minute rant about everything that’s wrong with the young people today, tackling everything from texting and tweeting to the days when “WE HAD TO LICK POSTAGE STAMPS” (That will make more sense when you come to see the show)!

The reason this show works so well and why everyone should see it is because whether you have siblings or not, each character is relatable in some way. They take some of the personality traits we all have but may not be proud of, and toss them together to create a wild experience. I can guarantee that you and your family, friends, co-workers, spouses, girlfriends, and boy toys alike will come see this show and find scenes that’ll make you think, “That’s just like us!” And again, if you don’t want to see a hot, shirtless hunk running around the stage, you’re lying to yourself (Don’t worry, I won’t tell)!

LEARN MORE
ABOUT VANYA AND SONIA AND MASHA AND SPIKE>>