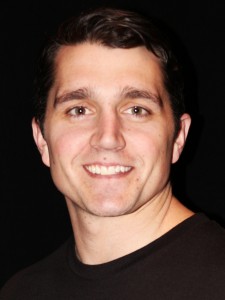 Stories can begin at QCT in many different forms, whether it is by working on a production for the first time ever or taking on a role completely out of your comfort zone. The latter holds true for Tim Bliefnick.

This new face to the QCT stage will be introduced to our audiences in a big way. Say hello to our “Spike” in VANYA AND SONIA AND MASHA AND SPIKE.

A Quincy University alumnus, Tim lived in Chicago and Indiana before moving back to Quincy about five years ago. According to Tim, who began acting in grade school, it has been about 15 years since he was last in a theatrical production. “I had a few bit parts in school productions, but never really tried to take it any farther. I was pretty shy and self-conscious growing up,” said Tim.

Tim acted through high school as a way to hang out with friends, taking on parts as “backup dancers” and “extras.” It wasn’t until a few months ago that a friend of his wife mentioned to her that Tim should consider getting back into theatre and audition for VANYA. Tim said, recounting that time, “I was a participant in Dancing with the Local Stars, so she saw me on a stage in a sense and thought that I might be a fit for the character.”

Tim decided that auditioning was worth a shot as it would be a new and fun experience. Although he didn’t think he would receive a role, he was happily surprised and excited to hear that he would play the confident and hunky Hollywood actor, Spike. “[Spike is] almost stereotypical of what people expect of young, attractive Hollywood actors,” said Tim. “Spike is very self-assured and confident in himself almost to the point of being oblivious to how his actions affect other people. He really has no shame and fairly flaunts it.”

Describing himself as shy and introverted growing up, Tim says that portraying a bold character that differs from him so much will be a challenge; but a challenge he is excited to accept. “Everyone I’ve met at QCT has been great and it’s been really helpful for my comfort level as I’m getting into it more,” said Tim of his first week in rehearsals. Taking in the positive energy from Brandon Thomsen and the VANYA cast, Tim is enjoying the process of putting on a QCT production for the first time—especially one that deals with such serious topics but also manages to be lighthearted and funny. “There’s something about being able to make people laugh that is uplifting.”

He is also taking to heart Thomsen’s favorite motto: “There is no failure, so try it!” While he has no idea where his QCT story will lead him to next, Tim has a message for anyone who has ever considered auditioning for a production. “Do it. You lose absolutely NOTHING and will have a great time doing it. It’s your opportunity to pretend to be someone else and put your own spin and interpretation on a character. There is no judgement, and [you have] full support from the cast and crew. And even if you don’t get the part, the process is worth it.”

For now, though, Tim is ready to work hard and have fun with the process. When opening night comes, he hopes that you will share in this experience with him as well. “Do it. Buy your tickets and put your butt in the seat. There’s going to be elements of seriousness in the play, but it develops in a way that makes it funny. There are parts of the initial readings where even we (the actors) have been laughing at the lines coming out and we know they’re coming.”

Tim Bliefnick and and his wife, Becky, have been married for seven years and have two sons: one who is five and one who is three. He is a graduate of Quincy University where he played football for four years and majored in Criminal Justice. He is currently the General Manager for Quincy Recycle at the recycling facility on South Sixth, but has been with the company in one role or another for 11 years now. Also… 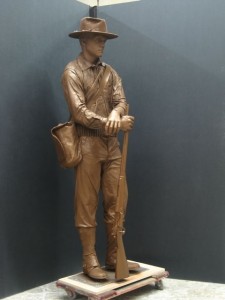 This is always kind of a funny thing I have in my back pocket, but there is a bronze statue in my likeness at a museum in Wisconsin. I don’t even know which one! When I lived in Chicago, a friend of mine needed someone who could stand still for 3 hours while they made a plaster mold of their body (including the face). Once they had the mold done, they cast it in bronze to look like a Civil War time soldier as part of a display showing soldiers through the years. Getting the plaster mold made of my face was actually kind of scary because I had to breath through straws they stuck in  my nose while my ENTIRE face was covered. But it was a pretty neat experience and that statue will last forever.