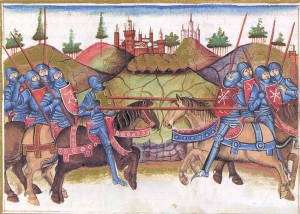 Is it just me or has anyone else shut off the recent political debates only to have your mind go immediately to Musical Theatre? No? Don’t you sometimes think, “This is very wrong! Maybe Sondheim or Jeanine Tesori could compose the music, right? Then we could adapt some of the politicos’ real words with some lyrics re-written by Tim Rice or maybe Aaron Sorkin. Oh, and those lame podium dances could be wonderfully re-choreographed by Cheryl Kaiser or maybe Susan Stroman. I mean, look what she did to Mel Brooks’ re-image of Hitler.”

It has already been done in some fashion. There is a song in the musical EVITA that I believe is the main theme of this Eva Peron story. It is titled “The Art of the Possible.” The original phrase attributed to Otto Von Bismark is “Politics is the art of the possible,” which means, “It’s not about what’s right or what’s best. It’s about what you can actually get done.” Getting everything you want is impossible, and often, you have to severely compromise in order to get anything you want at all. But in the end, refusing to compromise means you get nothing whatsoever.…Yawn, right?  But, in the hands of Andrew Lloyd Weber and Tim Rice, “The Art of the Possible” became a beautiful minuet ala Barn dance. The Argentine generals never looked so human and vulnerable. Defeated, but human and vulnerable.

The beautiful musical CAMELOT opens at Quincy Community Theatre on March 10th and runs through March 20th. In a way, this is a story of a medieval British political scene. Alan Lerner and Fredrick Lowe tells King Arthur’s story of hope, love, anguish, and compromise in a way that even Fox News or CNN would have to bow down in admiration. Well, maybe not bow down, but at least appreciate that in every story there are antagonists, protagonists, heroes, and buffoons. They only present characters who boast, accuse, distort, and promise. Nothing in the way they tell a story inspires anyone to break into song. If their story were told through Musical Theatre, it would be told with honesty, beautiful music, meaningful choreography, words that inspire, and, of course, there would be a point when everyone knows it is time to go home.

Tickets are on sale for CAMELOT, so come join us as we celebrate the opening of our Season “Stories Begin!” Season tickets are still on sale and they are a great way to insure your seat for all of our stories.

So, as you ponder your voting decision this Spring and Fall, I might suggest you imagine that person you support as the subject of a highly successful Broadway Musical. You have to ask yourself, “Is your candidate worthy of Lerner and Loewe, or of Mel Brooks and Susan Stroman?” And, Hey! As always, let’s be careful out there.