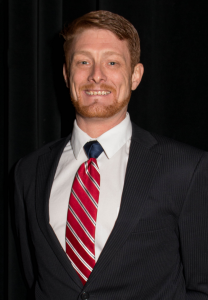 Nic Starman has quite a few jobs on his resume: life guard, Air Force mechanic, chiropractor; now he’s adding something a little bit different to that list: actor.

After working in several parts of the country for 17 years, the Quincy native has returned home and will be starring as the famed knight, Sir Lancelot, in QCT’s production of CAMELOT. More excitingly, CAMELOT will be Nic’s very first production ever! So how did Nic go from having no theatre experience at all to portraying one of the most famous characters on the stage?

Nic wanted to act all his life, but he never had the time or opportunity to do so. Then, while working at a health fair in the Oakley-Lindsey Center, Nic was approached by a volunteer for Quincy Community Theatre: JT Dozier. “[JT] approached me with such zeal and charisma that I just couldn’t refuse this once in a lifetime opportunity to start my thespian experience,” said Nic.

A self-described daredevil, Nic saw this as an opportunity to take a chance on a new and exciting adventure. So, with CAMELOT auditions only one week away, Nic decided to put his name on the list. “I love a good challenge, and this has been just that! I’m testing not only my memorization skills, but initiating new ones such as acting and singing,” said Nic.

And he’s certainly capable. Nic approached auditions with confidence, not limiting himself by believing that he wasn’t good enough to make the production. Instead, Nic took inspiration from the audition tips on the QCT website, particularly the one encouraging performers to “make bold choices and take risks.” By the end of the audition, it was obvious that Nic had taken that advice to heart. It’s fitting, then, that he was cast as another bold, brave soul: Sir Lancelot.

When drawing comparisons between himself and Lancelot, he cited the fact that they have both been involved in “many tangles with dangerous situations and still came away unscathed.”

He attributes this to his belief that, like Lancelot, he has been sent for some specific purpose. Unlike his heroic counterpart, he is still looking for his “Arthur” to assist. In the meantime, Nic is excited to relive his childhood fantasies through CAMELOT. Having watched Disney’s The Sword in the Stone as a child, Nic frequently dreamed about sword fights and knighthood. Now, Nic is enchanted by the thought that he will continue that tale.

“I look forward to many more thespian adventures with this team, but for right now, I just hope to help make this play one people won’t soon forget!”

You can watch Nic’s unforgettable transformation into the shining knight, Lancelot in CAMELOT, March 10-20!

Nic Starman is a 35-year-old native of Quincy. He has worked as a life guard under Ben “Double B” Bumbry at the YMCA, worked in the Air Force doing a number of really incredible things, became a CNC machine operator for a company that builds museum exhibits, and is now pursuing his new joy in life: chiropractic. He enjoys basketball, baseball, volleyball, rugby, surfing, snowboarding, kayaking, and rock climbing. Nic’s need for speed is usually fulfilled by way of cycling and mountain biking, but he would like to find himself behind the wheel of a race car someday. He also enjoys riding horses with his sisters on the family ranch north of Quincy, long runs on the beach, and is not opposed to walks on the beach in romantic contexts.