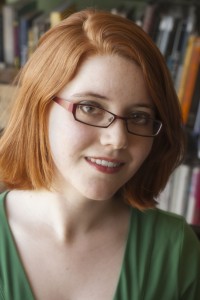 nce upon a time, there was a guest costume designer named Kristen and a show called SHREK.

Kristen Ahern has been living and working as a costume designer in the Chicago area for the last five years. Now, Kristen is coming to Quincy to work on QCT’s first show of the year: SHREK THE MUSICAL (TYA). To understand how Kristen’s QCT story began, you must first understand the beginning of her theatrical story.

Like many, Kristen participated onstage in elementary and middle school plays. So, naturally, when Kristen reached high school she auditioned for the upcoming production ONCE UPON A MATRESS. When she wasn’t cast, Kristen was devastated. Then it occurred to her: it wasn’t losing the chance to perform that upset her; it was losing the chance to work with the medieval inspired costumes used in the show. It makes sense considering Kristen learned to sew at the age of five, creating her very first pattern to make a vest for her teddy bear. Kristen decided to venture away from the spotlight, going on to work backstage designing and constructing costumes for the three annual productions at her school.

“In high school I fully intended to study history, but realized that didn’t lead to the creative life that I hoped for,” remembered Kristen. “I realized that costume design combined my love of history and literature, sewing and crafting skills, and would lead to a collaborative, creating, and exciting career.”

Flash forward to this past fall. For a few years, Kristen has been working as a costume designer on various projects. While looking through upcoming opportunities, she finds one for a fairy tale musical taking place at a vibrant community/educational theatre like the one where she got her start.

She replied and QCT responded. For Kristen, musicals often have opportunities for more creative designs. SHREK, then, was an obvious draw. Combining medieval and fairy tale roots with contemporary humor, SHREK transforms modern people into famous creatures from all of our childhoods.

“We are paying homage to the film and the children’s book, but put our own spin on it,” said Kristen. “The animal characters are more human with touches of their ‘creature-ness.’”

In many instances, they’ve even matched characters with specific celebrities to influence their style.

“There will be many familiar elements, but it will be more modern than the SHREK we’ve seen before.”

After SHREK, Kristen will begin work on QCT’s production of CAMELOT. Following that, Kristen’s theatrical story will continue as she applies to MFA programs for costume design. While she’s worked in everything from films to community theatre, Kristen is looking to work in television or at regional theatres after graduation.

In addition to learning and teaching people about other cultures—either time period or regional—through the clothing of the characters, Kristen also believes that costume design can and should be done more sustainably.

“Outside of design, I am passionate about conservation and am working to lead a more sustainable life,” said Kristen. “This influences my designs more and more as I try to bring this mindset to each company I work with. I hope to encourage better sourcing of materials and programs such as scrap fabric recycling in every place I go.”

We hope (and know) that Kristen will also be an inspiration to future designers as she continues her theatrical story.

“Backstage is not a compromise because you didn’t get onstage. Designers are just as passionate about what they do as the actors or directors. [Aspiring designers should] be prepared to master many skills like research, communication, budgeting, drawing, resourcefulness, and problem solving. This is a perfect career for someone who loves learning. Each production will teach you about a new time period, culture, or artist, and each one brings its own people, challenges, and new skills.”

Kristen is a freelance costume designer. She loves gardening, cooking, reading, museums, board games, and spending time with her 2-year-old husky mix.