A New Beginning for a New Season: LADY WINDERMERE’S FAN 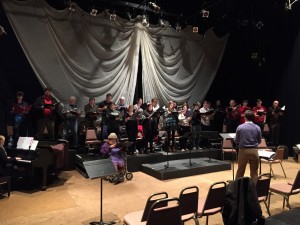 Beginnings. They are a collection of firsts; new experiences and stories that have the power to change both us and the world in which we live. It seems appropriate, then, that we have chosen to begin our 2016 season “Stories Begin” with a story that is itself just beginning.

LADY WINDERMERE’S FAN: THE MUSICAL is making its world premiere this weekend as a staged reading in Quincy Community Theatre’s Lab Theatre. What has it been like working on a work that has never been done before? Liberating. The cast and production team have proceeded without the pall of past productions looming overhead, allowing them to work completely unencumbered by the interpretations of others. The finished product is their own interpretation which, in small ways, has influenced the show itself. Where notes were needed, notes were added. Where dialogue wasn’t working, dialogue was altered.

Exciting as this is for our actors, the prospect of being the first to experience a new work of theatre is proving even more exciting for our audiences. LADY WINDERMERE’S FAN: THE MUSICAL sold out within two days. That’s without the assistance of a cast recordings or reviews, and it was done before even most of the cast were able to place their orders. So on the third day of tickets being on sale, a third show was added. By all standards, LADY WINDERMERE’S FAN: THE MUSICAL is on track to be one of the most unforgettable performances of 2016.

LADY WINDERMERE’S FAN: THE MUSICAL’s story is one that was seven years in the making. In 2009, Jan Nelson-Gompper began the challenging process of retelling one of Oscar Wilde’s most famous comedies through the modern medium of the musical. With input from Jan, Dr. David Eggebrecht of Concordia University sifted through the word-heavy four act play and condensed it, making room for songs that would explore the show’s themes and drive the action. A year and several workshops later, Jan’s vision was mounted as a full production at Wisconsin Lutheran College.

Sounds more like the ending of a story, doesn’t it? And yet, despite being well-received by audiences, Jan felt that her musical wasn’t quite ready. In order for LADY WINDERMERE’S FAN: THE MUSICAL to have a meaningful life beyond the college, more work needed to be done to tighten the material.

Years passed. Then late last year, QCT’s Artistic Director Brandon Thomsen and a former student of Jan’s reread the show alongside Wilde’s original play. Impressed by Jan’s ability to transform pages of Wilde’s dialogue into concise pieces of music that were both moving and effective, Brandon encouraged Jan to revisit the project.

Over a series of three days, the duo examined the entire show line by line, pulling it apart, rewriting sections, and eliminating unnecessary moments.

And now, the show they’ve assembled will be performed for the very first time for what could be a sold out run.

There’s no denying that this is a historical moment. Depending on audience reaction, LADY WINDERMERE’S FAN: THE MUSICAL may be presented in its current state at other theatres across the country. Or it might see more rewrites before the curtain opens on a full production.

Regardless, it’s now your turn to make theatre history. Tickets are still available for our added Saturday matinee. Call the Box Office now at 217-222-3209 to secure your seats.