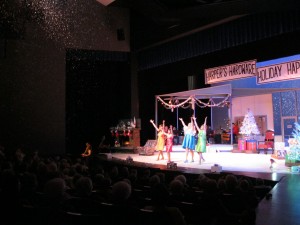 Several years ago I saw White Christmas at the Fabulous Fox in St. Louis. (Judy Garland’s daughter Lorna Luft was playing the Mary Wickes role.) For the finale, the entire company was onstage singing “White Christmas” and suddenly it began to snow. On stage the snow was merely a projection on a screen upstage; however, sitting in the audience, I felt a little tickle, I looked up and there it was — snow! It was snowing over the audience! I thought, “This is a great idea, and the audience is eating this up!” (Some were literally doing this. But that’s another story.) I put this “snowing over the audience” idea into my memory bank.

As I was preparing for WINTER WONDERETTES at QCT, I read the final song “Walking in a Winter Wonderland” and thought, “This is it! I can use that White Christmas idea. Let’s make it snow over the audience and give them an extra special wow factor.” Thanks to QCT Tech Director Extraordinaire Paul Denckla, we did it! Now some may say, “Brandon, you stole that idea!” And to them I say, “I’m a trifle deaf in this ear. Next time speak a little louder.” Seeing the audience’s reaction to that snow was truly a holiday gift for me. It’s like an audience seeing Peter Pan or Mary Poppins fly. You can see the wires but you buy into the magic of it all. You are connected to the story.

All right, so what’s the point of this little story? Recognize good ideas when you see one and ask yourself “why is that good?” Learn from it. It keeps us active artists, active audience members, and active life participants. QCT is presenting a workshop of a brand new musical of an Oscar Wilde play, LADY WINDERMERE’S FAN. Come experience something new and judge for yourself whether or not it was a smart idea to steal Oscar Wilde’s (public domain) play and turn it into a musical.