The Real Treasure of TREASURE ISLAND 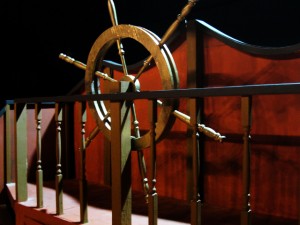 What do you associate with TREASURE ISLAND? Treasures untold? Daring escapes?

Pirates? If you think about it, TREASURE ISLAND is one of the most revolutionary pieces of children’s literature ever written. Since 1883, Robert Louis Stevenson’s TREASURE ISLAND has captivated the young and young at heart. At the heart of the story is the young Jim Hawkins, an ordinary boy living and working in his mother’s inn. His life is simple and quiet, save for the lunatic ramblings of their dogged old tenant Billy Bones. That is, until Bones’ sudden death reveals a seedy history of piracy and betrayal. Jim flees for his life, but not before taking a careworn map from Bones’ possession—a map leading to a dangerous isle harboring a vast buried treasure. Thus begins an adventure of a lifetime. With plotting pirates and mutiny around every corner, Jim must rely entirely on his wits to find the treasure and return home alive.

Over 130 years later, the images conjured by this adventure continue to burn brightly in each of our imaginations. From Flint’s treasure map to the peg-legged Long John Silver and his parrot, the characters and situations imagined by Robert Louis Stevenson still inform our modern notions of piracy. TREASURE ISLAND isn’t just a story about pirates; it’s the story about pirates. And that’s only the half of it.

TREASURE ISLAND is also the quintessential story of right, wrong, and that unnerving gray area in between. The story seems clear from the synopsis—the pirates are bad, the honest members of the expedition are good. And yet, when it is actually unfolding before you, TREASURE ISLAND spins a more disconcerting yarn.

“In life, we don’t get the luxury of knowing with certainty who is good or bad,” said Director of Student Theatre Kelsey Celek. “We also don’t get it in TREASURE ISLAND.”

That’s because it isn’t just any band of pirates with whom Jim is travelling; it’s Captain Long John Silver’s. Cunning as the day is long, Silver’s moral ambiguity defies the formula for children’s literature. Whether he’s manipulating his crew or attempting to gain favor with Jim, it’s difficult to know exactly where Silver’s loyalties lie—and exactly who he’s fighting against. On one hand, the audience is made to despise Silver for his treachery; on the other, admire him because he genuinely cares about Jim. The sense of uncertainty generated by this dichotomy blurs the lines between good and evil, right and wrong.

When you think about it, it’s incredible that TREASURE ISLAND is children’s literature. There is no clear hero or villain; only Jim, a young man trying to discern the meaning of good and bad for himself. A thrilling idea that continues to defy the stereotype of what children’s stories should be like, even to this day.

In bringing TREASURE ISLAND to life on the stage, director Kelsey Celek has chosen not to soften any aspect of this thrilling, and sometimes unsettling, story. Our pirates will be every bit as treacherous as the ones from Stevenson’s imagination; the line between right and wrong every bit as blurred. And for one hair-raising weekend, families can explore the message of this high-seas journey together. That is the real treasure of TREASURE ISLAND.

“For those of us who get to watch comfortably from our seats in the audience, TREASURE ISLAND is a series of ‘what ifs’ as we look into a life more adventurous—and more dangerous—than our own,” said Celek.