Skip to content
Home » Blog » A time to renew

A time to renew 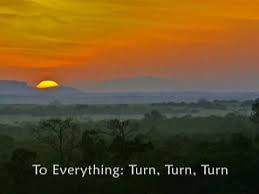 It is a fact that the only original words Seeger wrote were the chorus of “Turn, Turn, Turn,” and the final line “….I swear it’s not too late.”  The rest of the words were taken nearly verbatim from the Bible chapter traditionally ascribed to King Solomon. Sometimes this song is sung as a plea for world peace, many times as a comfort for the grieving, lately as a validation to the power of your voice, and sometimes as encouragement to renew your Quincy Community Theatre season tickets! Sacrilegious, perhaps, but actually it is not. The words simply acknowledge that there are moments and events in our lives where, if guided by wisdom and faith, we permit ourselves to accept and live them.

“A time to embrace” is now and I invite everyone to embrace this: We will open the year with Lady Windermere’s Fan, an in-concert presentation of a new musical adaptation of the play by Oscar Wilde. Originally produced in Milwaukee in 2011 with a musical book by Jan Gompper and Dr. David Eggebrecht and music and lyrics by Jan Gompper, the script and score have been reworked by Jan Gompper with the assistance of our very own QCT Artistic Director Brandon Thomsen. The revised piece will be given its premiere in the QCT Lab in January. Although not on the season ticket, we are also very excited about our student theatre musical opening on the main stage, Shrek, and our June student theatre lab play The Halloween Trilogy.

“A time to gather stones together.” Our opening season ticket show is the beautiful and yet tragic fairy tale, Camelot.  Inspired by the writings of Anton Chekhov, the relevant baby-boomer comedy, Vanya and Sonia and Masha and Spike is next. Our summer musical this year is the funny musical, Sister Act, probably not at all inspired by Sister Luc-Gabrielle, the Singing Nun, unless the good sister was once a smoky voiced lounge singer at a Las Vegas nightclub….ok, Nah! This will be followed by Almost, Maine, described as “Our Town meets The Twilight Zone,” and Peter and the Starcatcher, which could be a story of Peter Gabriel leaving Genesis, but is actually the back story to the legend of Peter Pan. Our bonus this year on the season ticket is the student theatre production A Wrinkle in Time, which could also be the story of Peter Gabriel leaving Genesis, but we all know it is from the book by Madeleine L’Engle, adapted for the stage by John Glore.

“A time to every purpose.” Now is the time to buy your season tickets for 2016. Rehearsals are in full swing for The Winter Wonderettes. It opens November 27th! We will finish 2015 with The Nutcracker, presented by Kaiser Dance Theatre December 18-20.