Skip to content
Home » Blog » Reaching Across the Ages

Reaching Across the Ages 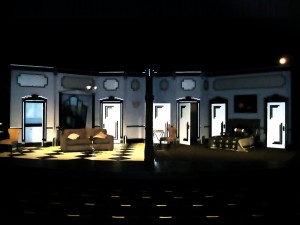 It’s a farce written in the 1980’s about the 1930’s being performed for an audience in 2015. And it’s still one of the greatest farces ever written.

The brainchild of acclaimed playwright Ken Ludwig, LEND ME A TENOR is one of those shows that never goes out of style. That’s mostly because it appeals to, well, people. All people, regardless of age or prior experience with the show, find themselves crying with laughter as they watch these poor, unsuspecting Ohioans stumble through the biggest night of their lives.

What makes LEND ME A TENOR so accessible? For starters, it’s downright hilarious. The curtain opens on the Cleveland Grand Opera Company on the afternoon of their largest production to date: Giuseppe Verdi’s Otello, featuring the world famous Italian opera tenor Tito Merelli in the titular role. Almost immediately, their world is plunged into chaos when a sleeping Merelli is mistakenly assumed dead. With an incapacitated superstar on their hands, the show’s producer conspires to divert disaster and distract the singer’s passionate fans by sending his assistant Max onstage in Merelli’s place. But when Merelli wakes up and starts wandering the premises, confusion, mistaken identities, mixed signals, and misunderstandings rule the evening.

It’s so funny, in fact, that it’s been translated into 16 different languages and has been performed in over 25 countries. What’s more, LEND ME A TENOR had a successful 2010 revival on Broadway, was nominated for the Laurence Olivier Award for Comedy of the Year, won several Tony and Drama Desk Awards, and has been heralded as “a remarkable piece of theatre…a masterpiece” (The London Times), “one of the classic comedies of the 20th century” (The Washington Post), and “one of two great farces by a living writer” (The New York Times).

Which brings us to the second reason it’s such a hit: everyone can relate to it. When you delve down deep into the story, LEND ME A TENOR is a play about learning to believe in yourself. All of us have some sort of talent or gift, but it amounts to very little if we don’t pluck up the confidence to share that gift with the world. Whether you’re 25 or 85, this is a lesson that we all have learned (or must learn) at some point during our lives.

Although this show isn’t necessarily for the kiddos, we’ve even found a way for LEND ME A TENOR to reach our youngest theatregoers (ages 5-10). It’s called “Family Night Out,” and while it doesn’t necessarily mean kiddos are watching this Ken Ludwig farce, it does mean that they will make theatrical memories while being exposed to elements of the show—namely opera, theatre, and comedy.

So, why is LEND ME A TENOR a show that never goes out of style? Because there’s something in it for everyone. Maybe that’s why it’s arguably the greatest farce of our time.