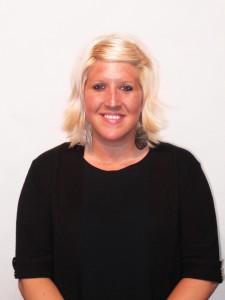 As the 2016 “Stories Begin” Season is about to be announced, there is no better time to look at how the QCT story of LEND ME A TENOR cast member Molly Oppenheim began.

Molly Elizabeth (Kattelman) Oppenheim was born and raised in Quincy. She has lived within the state of Illinois her whole life. Molly currently resides in Quincy with her husband, Jim, and their two cats, Scribbles and Fritzy.

“Back in March of 1991, my mom entered me into the Little Miss Quincy Pageant. I was 7.” Many would find the stage to be a daunting place at such a young age, but not Molly. “I think it was mostly my mother’s doing at that point, knowing that she did not have a shy child on her hands and that I was neither nervous nor scared about being in front of a lot of people.” Around that time, the theatre was holding auditions for CHARLOTTE’S WEB. “I auditioned and was cast as a Baby Spider and a Fairgoer/Spectator. “ That was just the beginning.

After graduation from Western Illinois University, Molly moved to the Chicago suburbs for about three years, where she met her husband. They moved back to Quincy in 2010, moved to Springfield for a year, and then moved back to Quincy. It wasn’t long before the lure of the stage brought her once again to QCT.   “Once I knew we were sticking around for a while, a good friend called me up and encouraged me to audition for THE 25TH ANNUAL PUTNAM COUNTY SPELLING BEE. I was lucky enough to get cast in that show, and it truly felt as if no time had passed.”

Molly’s current role is that of Maggie in LEND ME A TENOR. “Maggie has been a lot of fun because she is really a different kind of role than I have ever had a chance to play before.” Though the stage is very familiar to her, there are still always more firsts to experience. Normally more drawn to musicals, this is the first adult play that Molly has been a part of. “Once I read through the show, I knew that sealed the deal and that I wanted to audition.”

When asked why others should consider auditioning or becoming involved with QCT,  Molly’s response was “Because it is FUN! Theatre is FUN! The chance to pretend and play for a while, make believe, it doesn’t get much better than that!”

Molly’s story with QCT began 24 years ago, and it continues. “My love of performing stuck with me after that first show. Thanks, Mom!”