Be totally honest: when you think of pirates, one of the first things that come to mind is swords, right? Well, it’s a big week for the cast and crew of TREASURE ISLAND; today we begin incorporating stage combat into the play. It’s really going to feel like a pirate story once the swashbuckling begins!

Sometimes people think that being an actor means making an authentic experience for that character – that you have to do exactly what your character would do. Sometimes that’s true. But one big exception is any time there’s violence between characters onstage. It’s called fight choreography because the actors will learn it the same way they would learn a dance. Each move must be precise and repeatable. Why? So the cast knows exactly what to expect. That level of consistency keeps everybody safe. Even though the violence will look and sound realistic, when done correctly the actors will go unharmed. So to make sure it’s done correctly, we’re going to need some help.

In rehearsals, we’ll be joined by Lenny Bart, who’s serving as fight choreographer for this piece. Lenny and I have already met several times to discuss the style and storytelling moments that need to come into play within the fight scenes. Today Lenny will guide the cast through some basics – tomorrow they’ll put those skills to use as they learn the staging for all of the play’s big battles.   After Lenny has taught the material, he and I will choose one of the actors to be the fight captain. The fight captain is in charge of maintaining the combat staging on days when Lenny isn’t in rehearsal.

TREASURE ISLAND will include some custom-made weapons created by our properties designer, Kent Slack. These weapons were built to be an appropriate size and weight for our student actors. These modifications make them easier to use onstage. Kent has done a lot of cool research about the kind of weapons real pirates would have used in this time period, and the details are really coming through in his designs. He’s creating swords, knives, pistols, and rifles. They’re going to look great.

Once the cast has learned their scenes, we will have a fight call before each rehearsal and performance. The fight call is like a slow-motion practice round for any scene that involves stage combat. The fight call is like a mini-refresher course for the cast. Reviewing the material that often ensures that it will be executed the same way every time. That might not sound as exciting as the swashbuckling scenes in our imagination, but the actors’ safety is our number one priority.

As the cast begins to learn the combat staging, they’ll have many rules to follow. It’s important to make eye contact with their scene partners so everyone knows what’s coming. They’ll have restrictions on how fast they can move and how much force they can use. Sound picky? Well, it is, but it’s for a very important reason. Following these rules not only keeps the cast safe, but it helps them build the trust they need as a group to create a fun, action-packed sequence for their audiences. Nobody wants to share the stage with a loose cannon. (Pirate pun not intended.) Being able to safely perform this type of scene is an important skill for any actor. I am excited to begin this new part of the adventure with our cast. 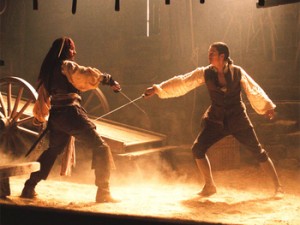 Caption: This picture is from my favorite swordfight! The scene looks effortless in the movie, but it took a lot of work to help these actors execute the scene safely.