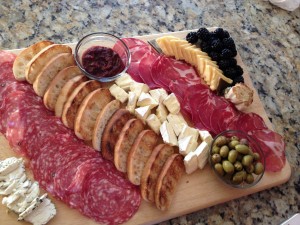 “Impressive, the things you learn through Community Theatre!” That was Stage Manager Jeri Conboy’s remark after a discussion of the dialogue during post-rehearsal notes Thursday night. The word does not pertain to my character, is not even uttered when I am on stage. But I am now wiser as a result of the question coming up.

In the play, it is used by the Saunders, General Manager of the Cleveland Grand Opera Company, who is discussing the fact that the Opera Guild Collation Committee has ordered “shrimp mayonnaise” for the after-party – and the refrigerator has broken down. Just one in a string of catastrophes featured in this farce!

So… what is it? Well, the initial discussion centered on whether it was a typo – and should have been Coalition. Except, it is followed by the word Committee which has a similar meaning, so the two would be redundant.

The next suggestion was that perhaps it was a derivative of the verb collate. Yes! Maybe the Committee was in charge of putting the shrimp mayonnaise together – like in an assembly line…? Not likely.

Finally, one of the Gen Xers in the group pulled out her phone to google it…

The term collation originates in the Roman Catholic Church, where it refers to the two small meals allowed on days of fasting, with or without abstinence.[1] Traditionally, the reading in Benedictine monasteries of excerpts from Collationes patrum in scetica eremo, written by John Cassian, was followed by a light meal.[citation needed] In modern Italian, the two small meals are the prima colazione (breakfast) and seconda colazione (lunch).

Aha! So, now we know. In the setting of this play, the Collation Committee was charged with the task of assembling a small meal that could be served immediately after the Opera to a group of potential patrons. Let’s hope that refrigeration kicks on soon!