An Ode to the Triple Threat Boot Camp 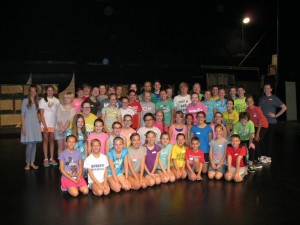 Every summer since 2008, students have flocked to Quincy Community Theatre. It’s not because they’re going to see some hip, new show (though we’ve done plenty of those), and it certainly isn’t because they’re looking for a place to relax. They’re here to work. Hard.

These students are part of the Triple Threat Boot Camp, a week-long acting intensive that focuses on the three musical theatre disciplines: acting, singing, and dancing. Starting Monday, around fifty students from grades 5-college took over our facility. In the morning, they move between choreography with professional choreographer Lauren Morgan, music with professional music instructor Megan Miller-Masterman, and acting with our very own Head of Education Kelsey Celek. In the afternoons, they show each other what they’ve worked on. Like so many boot camp experiences, this is designed to embrace camaraderie, to learn how to create a full stage picture, and of course TO HAVE FUN!  Military boot camps might disagree with the last one.

Tomorrow, they put it all together to make one fantastic showcase. The most impressive part? They’ve only had one week to learn each of these complex, exciting musical numbers and scenes. While the formula hasn’t changed, the content has. This year, our campers have used a wide array of modern rock musicals to hone their skills. And as they perform numbers from some of history’s greatest stage shows, they’ll be accompanied by a live rock band. You can’t get much cooler than that.

When the curtain goes up on Saturday night, the audience will see more than just a show. They’ll see the result of over 40 hours of hard work, the determination that keeps our students at the top of their game, and the commitment to the performing arts that drives each and every one of them to reach higher and higher. Seven years later, and the Triple Threat Boot Camp is still nothing short of inspiring.

We invite you to come witness their boot camp graduation, so to speak. The showcase is this Saturday night at 7:30 PM. Tickets are $5, available at the door.