Skip to content
Home » Blog » Heroes Behind the Scenes

Heroes Behind the Scenes 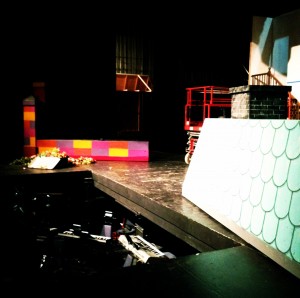 Theatre is the ultimate collaborative art form. Like pieces of a puzzle, it combines a multitude of personalities, disciplines, and talents to create one grand masterpiece. Those pieces don’t just fall together, of course. Theatrical productions take the dedication of many passionate people to rocket them from page to stage. Often times, we only consider the actors involved because they’re the only people we really get to interact with. However, behind the scenes is an entirely different perspective than the one we see when we’re sitting in the audience. It’s a whole new world (pardon the Disney pun) that we sometimes never get to see, but that we always experience through the spectacle of live theatre.

As much as we would like them to, sets don’t build themselves. Hours of labor each day, combined with meticulous artistic vision, are put into building each and every set piece that goes on the QCT stage. It might only take an hour to paint some tables, but it might take a few days to construct a house. Nothing in the theatre is ever just “good enough.” Technical directors and other scene shop workers ensure not only the aesthetic beauty of a stage’s scenery, but also the safety of the actors playing on it. Craftsmanship is an art, and builders never overlook details. Great strides are taken to create beautiful and realistic scene scapes to enhance the storytelling and bring our audience into the world of the show with us.

Costume designers also play a key role in storytelling. More than just making actors look pretty, they consider a multitude of factors when constructing costume pieces that make the characters pop. Basic considerations include the characters’ socioeconomic statuses, careers, personalities, the climate, the year, and the location. Fabric weight, color, and feel are also critical in building quality costumes. What was the fashion in the era? Can certain articles of clothing be pulled from our storage? Do we need to rent or buy new pieces? Every actor is measured for precise and comfortable costumes, alterations are made if necessary, and sometimes costumers cut and sew new pieces just for the occasion. There’s a lot of seam ripping and sewing involved in the process to ensure each actor looks and feels their best.

There’s a popular joke in the theatre that without the lighting designer/operator, actors are just voices in the dark. Without the sound designer/operator, it’s just dark. These two positions provide another level of sensory exploration in theatrical productions. Lighting can tell us what time of day and even what time of year we are witnessing. Special gels and filters can be placed over the bulbs to evoke different emotional responses, such as a passionate red or soothing blue. Shadows are just as important as light, taking us from a bright, colorful world to a dark, dank forest with the press of a button. Sound serves many of the same purposes. Microphones amplify voices, but ambient noises bring the scene to life. Thunder, animals, waves, and endless possible effects submerge the audience into the scene, triggering multiple senses for a heightened experience.