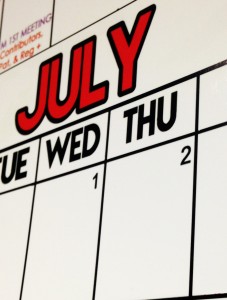 A rehearsal mantra for MARY POPPINS, courtesy of our vocal director Elizabeth Mannhardt, has been “No one’s life is changed by ‘good enough.’ Not yours, not theirs.”

In an amateur setting, it’s easy for one to say, “Well, it’s just community theatre,” and that becomes an excuse for sloppiness and laziness and being less than one’s self.

With this production of MARY POPPINS, members of the cast arrive sometimes an hour prior to their scheduled rehearsal in order to review choreography with their cast mates; when they could have an hour free, they instead work on their music; when they could have a day off, they are in the scene shop working on the set.

We often say the real show is backstage – – wait till you see all of the set pieces and all of the costume changes. You’ll wonder “how do they all fit back there.” It takes a hardworking, intelligent crew to maneuver everything into the seamless production it’ll become.

Working on this production has been thrilling because each person involved believes we are creating something exceptional. Thinking back on our rehearsal mantra, I find my life being changed because of their work ethic and belief that we can go from “good enough” to something “extraordinary.”