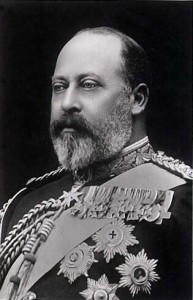 Mary Poppins takes place in the heart of London, 1910, at the end of the Edwardian era. Named for its monarch, King Edward VII, it was a span of roughly ten years squished between the Victorian era and World War I. Much like its namesake, this period was renowned for the luxurious fashions, foods, and fun found in its higher society. Less was never more. Extravagance was the norm, and your place in society could be determined by something as simple as the quality of your parties. The effects of this craze are even evident on Cherry Tree Lane.

Although this musical takes place in autumn, several months after the death of Edward VII, the effects of his reign are still influencing life in London. Edward VII was a man larger than life and had a bit of a reputation as a party animal. He had a taste for the finer things and loved to have a good time. He was even known to mingle with people from all class levels. To win his favor, his subjects would often throw grand dinner parties (with no less than twelve courses). These dinners consisted of such delicacies as caviar, game birds, exotic fruits, and decadent desserts. Generally, it was only the very wealthy that were able to hobnob with the king himself, though others certainly aspired to this honor.

The picture of Edwardian high society lies in “Jolly Holiday.” With lavish costumes and a jaunty tune, this song is all about style.  Everyone is out in their Sunday best, enjoying their little riches. Of course, for Mary and Bert, these riches happen to be their friends.  For a simple stroll such as this, we would think casual wear would be more suitable. After all, would you wear a ballgown or a tuxedo while walking in the park? The Edwardians didn’t necessarily dress for the occasion, but for other people. They enjoyed flaunting their wealth simply because they could afford to. It probably felt similar to what we feel like when wearing our favorite outfit on a great hair day. It’s nice to be admired, isn’t it? That was the goal of the Edwardian period: gain as much admiration as possible. There was no such thing as too much.

The upper class was an elite sort of club that many longed to be a part of, including George Banks. With such emphasis placed on wealth and refinement, it’s easy to see why he spends so much time and effort with his job. “Precision and Order” is a perfect example of this aspiration to a higher level of respect, where George is the family patriarch and his subjects as refined as can be. The “stiff upper lip” mentality was instilled in him by his childhood nanny, Miss Andrew, who would’ve raised him on Victorian values. He is the man of the house, with the duty to rule his family and keep them in check. This held true as he grew up and into the Edwardian era. The status of the Banks family, at times, seems more important to him than the family itself. He forces his wife, Winifred, to invite well-regarded ladies to her party, even though she isn’t friends with any of them. The children are expected to behave like adults and there isn’t time to mess about. George Banks is somewhat reminiscent of Peter Pan’s George Darling, known to fuss about his reputation and fib a bit to seem more important in society. By the end of our story, George has seen that family contains the greatest riches of all.