Seeing the World through New Eyes 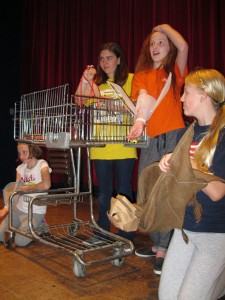 What is it like to see the world through new eyes? Just ask the cast of STELLALUNA.

Since April, the young ladies of STELLALUNA have had the opportunity to explore this popular story in a very unique way. Originally performed by Speeltheatre Holland and Seattle Children’s Theatre, this magical production introduces audiences to the baby fruit bat Stellaluna. When she is separated from her mother, Stellaluna finds herself tumbling into a strange new world where she must abandon everything she’s ever known. And just as Stellaluna learns to see from someone else’s perspective, so, too, has the cast.

According to Director of Student Theatre Kelsey Celek, one of the most charming aspects of this script is that the cast is required to serve several different functions to tell the story. Unlike most shows that rely heavily on speaking or singing, STELLALUNA requires its actors to also be puppeteers, dancers, musicians, sign language interpreters, etc. This versatility makes them more than performers—they’re “imaginative storytellers.”

Which gave Kelsey a wonderful new idea—what if the production looked as though it was created by the storytellers as well? “Jillian and Paul did a fantastic job of using found/recycled materials to build the world of the play,” commented Kelsey who has been hoarding cardboard along with the rest of the staff for months.

Before long, simple, everyday objects were transformed into Stellaluna, her friends, and the beautiful scenery that sets the stage for this special storytelling experience. Considered garbage only weeks before, these items have allowed Kelsey and the cast to do what human actors cannot. Kelsey, who is a fan of puppetry, embraced the challenge of “figuring out how to communicate through the pile of cloth and cardboard that makes up the puppet.” 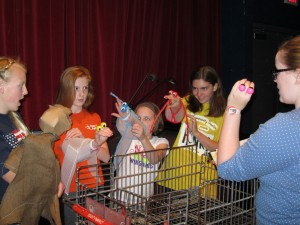 As one might imagine, breathing life into these characters has been no easy feat. The production, which has been a “physical endeavor” for the cast, has required them to do a “puppeteer workout” before every rehearsal to ensure they are ready for the rigorous activity demanded by the show. “They play themselves, their puppet characters, and whatever else the story demands,” commented Kelsey. “The whole cast is onstage for the entire show.”

Though learning how to tell this story has presented its challenges, the cast is “more than up for the task.” Kelsey has enjoyed watching them support one another throughout this entire process, cheering each other on with each new challenge. Together, they’ve created something truly remarkable.

In only one week, they will share that remarkable new world with you for the first time. And who knows? Maybe you’ll find yourself seeing the world through new eyes as well.