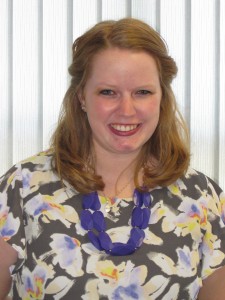 “If I didn’t have a career in the arts, I would always wonder, ‘What if?’”

Kelsey Celek, Quincy Community Theatre’s head of education, has come a long way since her first experience in the world of theatre and is always making new discoveries.

Before theatre, Kelsey was a shy kid who didn’t like public speaking. After she was cast as a Bean in the Missoula Children’s Theatre production of Jack and the Beanstalk, she started to come out of her shell. “Immediately hooked,” she grew more confident as she continued acting in her community and eventually decided to pursue theatre as a career.

Initially, Kelsey wanted to be an actor, but she also dabbled in playwriting and discovered her passion for teaching theatre. The great thing about theatre is its collaborative nature, combining several different art forms to make one masterpiece. The experience is never the same, constantly growing and changing. There are lots of hats to be worn in the theatre world, but working with children is one of her favorites. Working with young people allows her to do what she’s best at but also to keep creating, re-imagining theatre in a new way every time her students make their first discoveries.

Before QCT, Kelsey worked all over the country, from Nebraska to New York. She worked with the Missoula Children’s Theatre in Montana, as well as with the Omaha Theatre Company. As a teaching artist, she gets to spend equal time pursuing education and acting, the things she loves most. Her desire to keep learning and improving led her to the newest chapter of her life at QCT.

Kelsey’s current directing project is a musical adaptation of the classic children’s book, Stellaluna, the story of a little bat in a big, strange world. Exciting and unique elements of this production include tap dancing, sign language, musical instruments, and even puppetry (one of Kelsey’s favorites). The use of puppets allows the actors to express themselves and the characters in a different way than their human counterparts, often doing things we just can’t. Stellaluna invites the audience and actors to share this tale in an intimate way, bringing it to life together.

During the rehearsal process, the entire team is encouraged to experiment with new ideas. The theatre is a nurturing space that allows students to use their imagination and craft something unique together. Not only do they strengthen the relationships between their characters, but also with each other. Each person brings something special to the table and each person has the chance to let their light shine.

After more than a year off the stage, Kelsey was “itching for the opportunity” to return. With inspiration from the public’s positive response to the summer musical, she decided to take the plunge and audition. Now making her QCT debut in the title role of Mary Poppins, she is eager to fly, of course, but also to work with the children and their “generous spirits.” Being a part of their story and their experience is one of the blessings of working on a show like this. She is very thankful to be a part of this exciting production!

Looking to the future, Kelsey hopes to build an even stronger community in the theatre, for volunteers and students alike. “There is a place for everyone,” she encourages. “If there’s something you want to do, do it!” Collaboration is the name of the game, and there’s nothing more rewarding than coming together to create something amazing. There’s always more to learn and always room to grow, no matter how old or experienced you are. There are no limits and nowhere to go but up with the wonderful support of passionate people like Kelsey.