Skip to content
Home » Blog » How to Put on a Musical

How to Put on a Musical 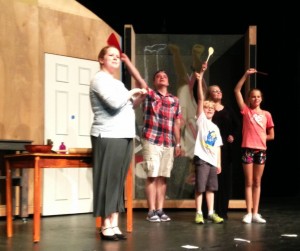 From the outside, showbiz seems so glamorous: lavish costumes, adoring fans, getting to do what you love for a living. Broadway stars make it look so effortless, like they were born with tap shoes on their feet and a song in their heart. What many people don’t realize is that theatre is a tough industry. Rushing from audition to audition, four-hour dance rehearsals, and daily vocal exercises are par for the course in the acting world. While things aren’t quite as hectic in Quincy as they are in the Big Apple, much of the same is expected of our performers. Putting on a musical isn’t for the faint of heart; it will take 110% of your effort at all times. You’ll work as hard as you can, and then work even harder. And you’ll love every second.

The first step to putting on a musical: auditioning. Once you’ve signed up for your appointment, you read the script to get a sense of the story and familiarize yourself with the scenes. You’ll be asked to read from the script in your audition and preparation is key. One of the most fun and frustrating parts of the pre-audition process is selecting your audition song. It’s just as difficult as finding a movie to watch on Netflix: do you pick something sad, funny, or exciting? Ballad or up-tempo? Finding something in the style of the show is another task, but do you go for similar musical style or similar content? The possibilities are endless and you’ll probably change your mind at least three times. When you’ve got your music and your outfit nailed, all that’s left to do is audition! You’ll go in with all these expectations and interpretations for what you’re performing, and when you step in that room, it’s all a surprise. You’ll do things you planned and things you didn’t. You’ll mess up, you’ll nail it, and you’ll have a ball. Then comes the waiting. And waiting. And waiting.

Congratulations! You got cast! Now what? You’ll meet with the entire cast and production team to pick up your script and go through the formalities: behavioral expectations, attendance, schedules, the basics. The first rehearsal is what’s called a table read, which consists of a reading of the script and discussion. Theatre is a collaborative art form where everyone’s input matters and everyone has a voice. From there, you’ll go into music, dance, and blocking rehearsals, each of which exercises very specific skill sets.

Singing isn’t just about sounding good: it’s about telling a story. It’s said that characters in musicals sing because the stakes are so high that simply talking won’t express their feelings, and that’s exactly what goes into music rehearsals. Music is a powerful tool and can evoke every emotion imaginable. It’s the job of the performer to transform the notes and lyrics they’re given into their own complete story, with each song taking the audience on a journey with them. Anyone can sing; it takes an artist to make music.

Choreography looks beautiful, but it can be grueling. With the amount of dance involved in a musical, there often isn’t time to break every step down like an 80s workout video. That isn’t to say that you have to be an American Ninja Warrior to be a dancer. Go over the steps in your mind when you’re cooking or doing chores, practice every chance you get, and you’re golden. Like singing, dancing is about telling a story, but instead of using your voice, you’re using your body. Actually, you’re usually doing both at the same time. There’s a whole lot going on and you have to remember to keep up your health. Take care of your body and your body will take care of you. Dance is a great workout and requires a great deal of stamina. However, all that work will be in vain if you don’t sell it!  If you aren’t having fun, the audience isn’t having fun. And if you aren’t having fun, what’s the point?

Blocking rehearsals demand mental prowess as well as physical. Blocking is just a fancy word for when and where you move on the stage, but it’s here that actors experiment and develop their characterization. Of course, that will also happen in other rehearsals; blocking, however, is where the actors breathe life into the written words of the script. Getting up on your feet and taking chances is the name of the game. There are no wrong answers and no mistakes to be made, as long as you’re putting your heart into each of them. Acting is living truthfully under imaginary circumstances and the stage is a playground for the imagination.  There is always a new discovery to be made, whether about the story, the character, or the self. Often, growth as an actor accompanies growth as a person as we learn to open our minds to all possibilities and expand our horizons beyond the familiar.

Once the entire show is blocked and choreographed, there are several run-throughs. The whole show is continually performed and polished, adding the orchestra, lights, microphones, and costumes until the show opens to the public. Even then, it will continue to grow and adapt to the audience. The most thrilling part of live theatre is that it’s never the same twice. Each audience provides a different energy for the performers to work with, guaranteeing a unique performance every time. The audience is just as much a part of the show as the actors: we’re all experiencing it together.

Theatre is hard work. It’s a job. It takes real perseverance and dedication to pull off a musical, especially when you’re making a living of it. It will push you to your limit and then push you farther. That’s how we grow, isn’t it? You can’t soar if you never leave the nest. The best part? You’re never alone. There’s always someone jumping in with you and supporting you. We’re stronger as a cast than we are alone, and every day is a new adventure.

Are you up for the challenge?