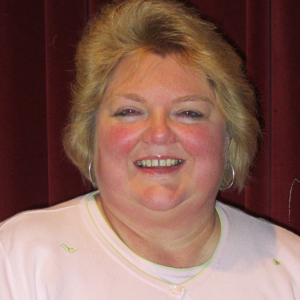 Shelley is a newcomer on the QCT stage, but plays the role of Norleen in MAMA WON’T FLY as if she had lived with her all her life. And, maybe she has.

Shelley grew up in Quincy, graduating from both QHS and QU, then embarked on her journey in teaching. She, her husband Chuck, and Lillie the yorkie are in the process of building a new home on their place near Benbow, MO. Over the years, Shelley has earned a master’s degree in Education and Specialist in Education degree. For the last 19 years she has taught school in the Palmyra, MO School District.

When asked why she auditioned for this show, she said she was first initiated in the world of theatre as a “theatre mom.” Shelley enjoyed watching the process and her daughter’s experiences at Hannibal Community Theater.

“I saw the fun and excitement felt by the actors as each night the show developed into the final polished performance,” said Shelley. “It looked so fun, I wanted to experience that feeling as well.”

So, the next production her daughter auditioned for, Shelley auditioned for as well. She was cast as Mrs. Anderson, the grumpy lady stuck in the hospital and trying to run the show in The Best Christmas Pageant Ever. And, as often happens, Shelley was hooked.

A little while later, along came Mama. “I love comedy, and this play is hilarious,” said Shelley. “When I read the synopsis, I knew it was time to audition for Quincy Community Theatre.” Shelley admitted that she fell in love with her character Norleen, claiming she had more than a little bit in common with her. I suppose her twins, Kalynn and Roy, might be good judges of that.

Having someone new on the QCT stage is always a great experience for us, but what is that experience like for the newcomer? For Shelley, this entire process has been a “blast”–especially getting to know the other actors. 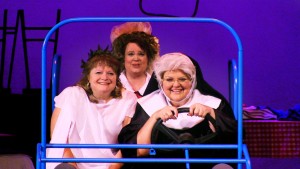 “I feel so lucky to work with Brenda Stalder who plays my daughter Savannah and Kristi Sanderson who plays Hayley, the bride-to-be,” commented Shelley. “They are so talented and bring their characters to life. We are a great team and complement each other. I have made several new friends already with the great cast, crew and our directors. Our director Brandon has guided me along the journey in studying Norleen and how she responds and reacts to situations she finds herself in along the zany trip to California. Brandon allows you to explore and expand the character and try new things. He has really helped me develop Norleen into the lady you see portrayed on stage, not just some lines I recite out of a book.”

She is most excited about “hearing the audiences laugh.” For Shelley, it’s the greatest feeling in the world to know that she has caused someone to laugh at what she has said or done on stage. Allowing for a little unabashed exposition, we asked Shelley why people should come to see this show.

“It’s a wonderful story, full of hilarious characters portrayed by very talented actors,” she said. “It is great to see the relationship between Mama and Savannah. Add in the daughter-in-law seeking Mama’s approval, yet trying to bond with her sister-in-law, and who is torn as to which she should try to please. The characters these gals meet along the trip provide for some very funny moments and situations. Are you guaranteed to laugh out loud? Several times!”

She also wanted us to know that Sunday, May 10th, is a very special day. Besides being Mother’s Day, Shelley’s children are both graduating from Quincy University. Roy, her son, is receiving his bachelor’s in Criminal Justice, and Kalynn, her daughter, is receiving her bachelor’s in Human Services. That afternoon is the final performance of MAMA WON’T FLY, and it is also her mother’s birthday. All the more reason to come and celebrate with Shelley at the show.