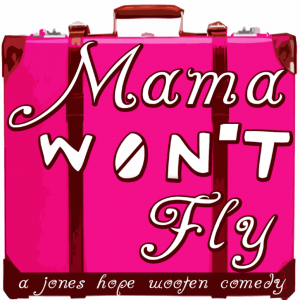 It takes a special kind of show to attract the folks who came to audition for MAMA WON’T FLY. Actors and actresses of all ages and experience levels entered the audition room, all hoping for the chance to be part of this insane comedy and all impressing the casting committee with their talent.

“MAMA WON’T FLY just reminds me of normal people overcoming their shortcomings,” said Joe Osier, one of the actors who was cast in the show. “They’re dealing with life’s ‘bumps in the road’ and realizing that family is so very important. It is very funny, with some characters I either have had in my own family, dealt with in life, or know others that have had these characters in their family.”

For his wife, Sue, the appeal of MAMA WON’T FLY was in its humor and casting requirements. Four years ago, Sue joined a group of friends as a season ticket holder. Though she joined for the social aspects of attending the productions, Sue quickly realized that she loved coming to see the shows—especially the comedies. Seeing that this particular production calls for a multitude of “over the top” southern women over the age of 50 (and not wanting to miss out on the fun), Sue recognized an opportunity to transition from audience member to actress.

“I developed a crazy southern accent when my son Kyle was little,” explained Sue. “He loved the book Pecos Bill. After you read a kid’s book every night for months, you try to figure out a way to “spice it up.” So I began reading the voices with a southern accent. The crazier my accent got, the more he giggled. MAMA seemed like the perfect play for me to launch my acting career!”

Similar reasons inspired Barbara Fry to audition for MAMA WON’T FLY. Yet, for her, this wild road trip comedy marks a long-awaited return to the stage.

“There aren’t many parts for folks my age, and I was definitely tempted after reading the play,” said Barbara. “So I thought, ‘this is a hysterical play, the small parts are little gems, why not give it a shot and audition.’”

So far, the experience has been “fun, exhilarating, and satisfying.” For fellow actor Gregg Boyer, it’s like returning home.

And so far, there has yet to be a dull moment with this hilarious cast of 15. Though they auditioned for a multitude of reasons, one thing is for certain—MAMA WON’T FLY speaks to all of us, whether we’re stepping into the spotlight for the first time, returning to the stage after years away, or anxiously waiting to see this hysterical comedy with a whole lot of heart.