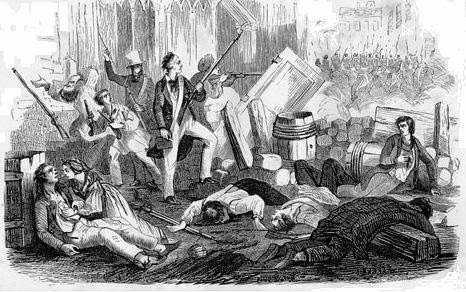 Today marks the 182nd anniversary of the event that inspired Victor Hugo’s classic novel and the musical we’ve come to know and love.

But it’s not the French Revolution.

In fact, the French Revolution ended in 1799, sixteen years before Jean Valjean is released from his sentence. The battles fought in Les Misérables are actually part of the June Rebellion of 1832. Enjolras and most of the other Friends of the ABC were actually born years after the end of the Revolution. So what inspired this rebellion, thirty-three years later? Were things really that bad in France?

Well, yes. After the execution of King Louis XVI and his wife, Kirsten Dunst Marie Antoinette, in 1793, Louis XVII was recognized as the new king by many royalists. Louis XVII was only eight years old at this time and “ruled” for only two and a half years before dying of tuberculosis. After this unsuccessful monarchy, of course, Napoleon Bonaparte declared himself the emperor of France (you know, because he could). He was eventually defeated at Waterloo and exiled to St. Helen. Then, in 1816, yet another new king was appointed: Charles X. The thing that people didn’t like about Charles X (other than the fact that he was a terrible king, but we’ll get to that) was that he was only appointed because he was a Bourbon. Not the drink; the family. He had nobility in his blood and therefore had some divine right to the throne.

Charles X was extremely conservative and actually attempted to take complete control over France, creating an absolute monarchy. That was a big no-no in France and in 1830, the people rose for the July Revolution (also known as the Second French Revolution). After three “glorious days,” the people of France won a constitutional monarchy, a system in which the king would maintain a role as the Head of State. In comes Louis-Philippe I, the first “King of the French” rather than King of France. This is where our story begins. 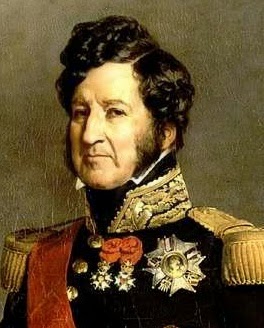 Louis-Philippe was a “firm” believer in civil liberties and rights for all people. Unfortunately, he didn’t really care enough to follow through, so the people of France ended up hating him, anyway. The poor were still disenfranchised and could not vote because poll fees were so high, not to mention the cholera epidemic of 1832. The most poverty-stricken neighborhoods suffered the worst, to the point that accusations were made that the government was poisoning their water supply to silence them.

Now, many students of Paris at this time (like our heroes) were fed up with this system, and for good reason. They desperately wanted a republican government, a system that granted supreme power to the people. General Jean Lamarque, who had been the original Friend of the Abased, passed away from the aforementioned cholera epidemic and acted as the catalyst for the uprising.

On the morning of June 5, Larmarque’s casket departed for the funeral procession. On the way, it made two stops: one at Napoleon’s home to honor the man’s military service and another unscheduled stop. It was at this time that the soldiers of the July Revolution cut free the horses and carried Lamarque’s casket themselves. Talk about dedication. That afternoon, when the procession had finished a “spectral” mounted on a black stallion rode into town, waving a red and black flag saying “Liberty or Death!” Shots were fired and the revolt began. 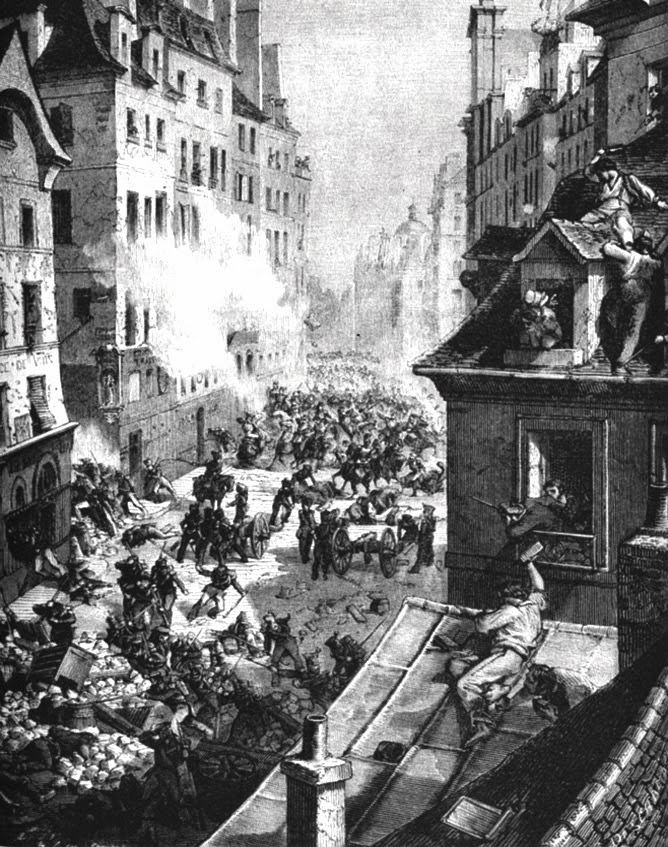 Using paving stones, furniture, and anything they could get their hands on, students all over Paris constructed their barricades to block the military from advancing. The numbers weren’t even close to a fair fight as the French military was ten times larger than the forces of the rebels. By the next evening, June 6, only one barricade remained. This barricade happened to be at a café and was armed with snipers. Starting to sound familiar? Four army units, armed with cannons, quickly demolished the barricades until only rubble remained. Over 800 were injured or killed in this rebellion that lasted less than twenty-four hours.

The worst part? The June Rebellion accomplished nothing. None of their goals were achieved. The power of the king wasn’t even threatened. This makes Grantaire’s lamenting in “Drink With Me” even more gut-wrenching. The world did not remember them when they fell. Their deaths really didn’t mean anything at all. However, this battle was so popularly romanticized because it was led almost entirely by students. It’s a powerful message that is too important for young people and people of all ages to forget, spoken so eloquently by little Gavroche: “Little people know when little people fight, we may look easy pickings, but we’ve got some bite.”

Fun fact: Victor Hugo was penning a play in nearby Tuileries Gardens when the shots rang out. Because he was surrounded by barricades and all the shops had closed up to protect themselves, Hugo was forced to hide himself between columns of a wall until the battles had ended.